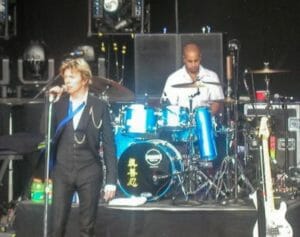 Feeling very sad about the loss of David Bowie, I think we all have one song of his which meant something to us.

Due to lung cancer, David died on Jan 10th 2016 in Manhattan at the age of 69. Black star, his latest album was released just two days before his death.

London-born, he started his musical career in 1963. His first major hit in 1969 – Space Oddity made the English Top 5 Seventies chart.

Over the last decade, his music and style changed; each incarnation won constant praise from various music artists.

His peak occurred in 1983, when “Let’s Dance” topped the charts in both the UK and the US. For the remainder of his career, he continued to experiment with musical styles.

Throughout his career, his sexuality was the subject of rumor and reflected in his look. Bowie said himself that his sexuality was more a product of the times in which he found himself rather than an expression of his true feelings.

He not only showed new musical styles but he also showed audiences new ways of dressing. Fans copied his style, even to the point of shaving their eyebrows.

David Bowie walked his path setting trends, not copying others. He went so far as to decline a knighthood offered by the Queen, saying, “It’s not what I spent my life working for .”