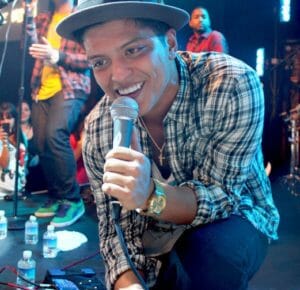 Here’s a short piece I wrote on Bruno Mars, one of my favourite artists.

Born and raised in Honolulu (Hawaii), he later moved to L.A to pursue a musical career.

In 2009, Bruno Mars co-founded the Production of Nothin’ on you which was a massive hit and launched Bruno Mars to the big scene.

His first album released in 2010 included four big hits : Just the Way You Are; Grenade; The Lazy Song and don’t forget Nothin’ On You.

The release of his second album in 2012 was just as successful and showed a more upbeat trend.

His biggest hit ” Uptown Funk” sold more than 100 million copies ( albums and singles). A collaboration with Mark Ronson made the song infectious; people had to dance to it.

Many people would do choreography versions of this song on Youtube. His original song to date has been seen almost 2 billion times. It is a song that gets under your skin.

Bruno Mars is the face of reborn funk